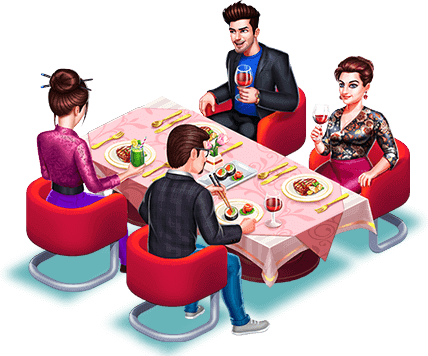 Escape into The World Of Fine Dining

Food is the universal language of love. Do you ever whip up a cheese cake? Or are you the one who gobbles up some salad for the sake? Either way, you can now proudly don a chef hat, live the adventures of a modern chef and build your own culinary empire.

Cook appetising delicacies from handy hamburgers and hotdogs to exquisite sushi and lobsters. Hire and manage an excellent team of world-renowned chefs and cater to the needs of your ever-enthusiastic customers. Embrace your style and choose from elegant antique to extravagant picturesque to adorn your restaurant. Engage in trade-offs and global tournaments to attain the ultimate culinary honour. Indulge in strategic storylines and immersive role-plays to make the best of your restaurant adventure.

Following its launch in 2014, Star Chef burgeoned into a successful game in the freemium cooking segment. However, over a course of time, we were running into technical limitations in the game engine which restricted us from enhancing the game the way we wanted. This is when we decided to carry forward the remarkable legacy of Star Chef!!

Nuh-uh, it was no piece of cake! Tenacious spirits, a couple hundred cups of coffee, and a gazillion sketches and mood boards later, we landed on the most lovingly crafted and zealously designed concept for Star Chef 2. Now, all we had to do was gear up for a roller-coaster ride with twists and turns of art, development & execution. Ah..the fun!

Driven by the connoisseurs in us, we had our hearts set on the motive: Live the Chef Life. With Star Chef 2, we intend to leave no stone unturned in delivering a one-of-its-kind cooking extravaganza.

The secret ingredient is emotion! We explore our deepest love for food and create stories to evoke relatable emotions and passion in players.

Brainstorming for ideas that can strike the right chord, we swayed over tales of lucky inheritances, magical escapes, island retreats, and a few hodgepodges. After taking multiple shots in the dark, we devised a compelling story that stirs the purest feelings: Childhood Memories.

What do you do when your dream restaurant is up for sale? Gear up to purchase, rebuild and transform it to the most glorious restaurant in history.

We were fixated on making the best out of the opportunity to start afresh and anew. And kicked it off with complete transformation of the game graphics, which resulted in an aesthetic terrain and dynamic in-game buildings. The terrain layouts are now revamped offering the players the flexibility to decorate and customise their restaurants in a million different ways!

Now that we were satisfied with the elegant visuals, it was time to nail the extra oomph! Multiple mini-games and crafting mechanisms are incorporated to keep the players engaged and entertained throughout their journey of building a culinary empire.

One Cooking Battle a Time

We had a firm motive: to create a game fuelled with life. All we needed was a great idea to break the monotony of the gameplay and spice it up with a strategic smack. This is when things started piecing together like a dream and we had our moment of Zen: Collaborate and Compete!

Nevertheless, integrating a competitive element came with challenges, one of which was retaining the core values of the game. Innumerable design iterations and a few tough choices ushered the perfect balance between creativity and practicality. A unique blend of time-management and simulation was the fruitful outcome.

Chef Masters and Tournaments enable a broader spectrum of community play. You evolve as a chef with real-time cook-offs, global leaderboards, and friendly collaborations.

In a gaming era brimming with cooking renditions, one may wonder what makes Star Chef 2 a true success- an authentic journey! Cheerful characters, attention to detail, complete customisation, and sheer artistic excellence.

Transformative makeover of chefs: Every character is granted a unique personality of its own to enable lively interactions with players. Susan- the frying expert, is the one with curly locks and chirpy talks. Luca- the pizza signore, will always have your back with a handful of kitchen hack.

You are at liberty to explore your imagination and decorate the restaurant. Your creativity is your muse, and your restaurant is your art!

Grab your cooking gear and put your love for cooking to the test. It’s time you lived the chef's life.